It started to spit. I looked up at the cloudy sky and started to place my bets. Should I pack up and run to a covered shelter or wait it out… I chose the former and watched as the soft rain fell all around me. And then the sun came out and I smiled. A rainbow. 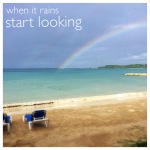 Did you know that rainbows show up in the bible several times? Usually they represent a promise from God but in one specific instance it represents something else… what God looks like.

I have always wondered what God looks like… Does he have blue eyes like me? A Polish nose? Does he have perfect teeth, fresh from a dental cleaning and years of braces? Is he buff like the Greek gods were portrayed? Or is he harder to see? Like staring into the sun, too bright to see detail?

A few people in the bible have seen God. Ezekiel was a pretty big deal prophet. Him and God were tight… to put it loosely. And on several occasions he would try to describe God or what he saw. Some of his descriptions honestly sound like something out of a game of World of Warcraft… but when you’re trying to explain something that’s never been seen before you use similes and metaphors and hope your reader or listener can get the essence of what you saw. And in between the explanations something familiar jumps out at me. Something I saw just this morning…

“Like the appearance of a rainbow in the clouds on a rainy day, so was the radiance around him.”

I don’t know what God looks like. But I know how I feel when I see a rainbow. The joy, the constant smile, the awe I experience at seeing a gradient of colors. The childhood excitement of looking for each end, and wondering if the end that falls in the ocean can be seen underwater. I feel the calm a rainbow brings announcing the rain is over.

How often do we focus on the rain and forget to look for the rainbow? How often do I look for God specifically and miss the beauty that surrounds him in people like you?

I don’t know what God looks like, but if the way I feel when I see a rainbow is any indication of what it will feel like to meet him… then heaven should be a pretty cool place.